Adlington was born in Mansfield, Nottinghamshire, where she attended The Brunts School, which became known as Brunts Academy from 2012. She started swimming with Sherwood Colliery Swimming Club and was selected for the Nottinghamshire County Elite Squad (Nova Centurion Swimming Club). She swam in local swimming leagues for Nottingham Leander Swimming Club, having taken part in the National Speedo ‘B’ Final in May 2010. Adlington’s great-uncle was former Derby County goalkeeper Terry Adlington, and she is a keen Derby supporter.

In 2005, Adlington’s sister, Laura, was affected by encephalitis, an inflammation of the brain. Her sister recovered over time, but its impact inspired Adlington to say in 2012: “It made me more determined. It makes me train harder”.Adlington became an Ambassador of the Encephalitis Society in 2009, to help raise awareness of the illness.

Rebecca Adlington enjoyed a day out with her daughter Summer and boyfriend Andrew Parsons as they attended The Big Feastival in the Cotswolds, Oxfordshire, on Friday 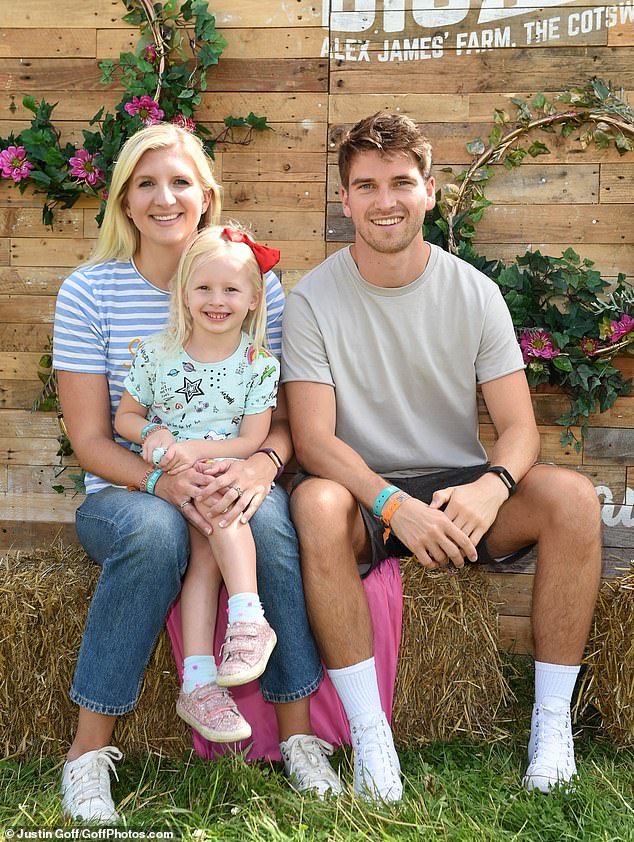 Motherly love: Little Summer looked the spitting image of her mother as she perfected an angelic pose and their bright blonde locks glistened in the sun

In 2014, Adlington married former swimmer Harry Needs. The couple had a daughter together, Summer (born 2015).In March 2016, Adlington announced her separation from Needs.

Adlington represented Great Britain in the 2008 Summer Olympics, competing in the 400-meter freestyle and 800-meter freestyle events. She was also scheduled to swim in the 4×200-metre freestyle relay but was rested in the heat and the team failed to qualify for the final. In the heats of the 400-meter freestyle, she broke the Commonwealth record with a time of 4:02.24. On 11 August 2008, she won an Olympic gold medal in the same event, with a time of 4:03.22, beating Katie Hoff of the United States in the last 20 meters. She was the first woman to win swimming gold for Great Britain since Anita Lonsbrough in 1960. She was the first British swimmer to win more than one gold medal at a single Olympic Games since Henry Taylor won three in 1908.

In 2009, Adlington admitted she suffered from the expectation placed on her ahead of the World Aquatics Championships in Rome, and although she swam a personal best she was only able to win bronze in the 400-meter freestyle. She added a second bronze in the 4×200-metre freestyle. In her favorite event, the 800-meter freestyle she missed out on a chance for a medal and came fourth.

In 2010, Adlington won the 400-meter freestyle at the European Swimming Championships in Budapest but again failed to win a medal in her favored 800-meter freestyle as she faded to seventh. She won bronze as part of the 4×200-metre freestyle relay team.

At the 2011 World Aquatics Championships, Adlington won the 800-meter freestyle gold medal, beating Lotte Friis over the final 50 meters, and silver in the 400-meter freestyle behind world record-holder Federica Pellegrini of Italy.

On 5 February 2013, Adlington retired from all competitive swimming, at the age of 23. Since retiring as a competitor, she has worked for BBC TV as a swimming pundit at the Olympic Games and World Aquatics Championships and made various other media appearances.

Adlington set a new British, Commonwealth, European and Olympic record of 8:18.06 in the preliminary heats of the women’s 800-meter freestyle on 14 August 2008. She went on to win the Olympic 800-metre freestyle final on 16 August 2008 in a world record time of 8:14.10, her second gold of the tournament, a full six seconds ahead of the silver medalist, and two seconds ahead of the former world record which had been set by Janet Evans when Adlington was 6 months old. At the time, this was swimming’s longest-standing world record.

The Sherwood Swimming Baths in Adlington’s hometown of Mansfield, where she began swimming as a child, was renamed the Rebecca Adlington Swimming Centre when it reopened after refurbishment in January 2010. The Yates Bar in Mansfield was renamed the Adlington Arms in her honour, although it soon reverted to its original name.

In November 2008, Adlington was named as the Sports Journalists’ Association’s Sportswoman of the Year, receiving her trophy at a ceremony in the City of London from HRH Princess Royal, herself a former winner of that award. On 14 December 2008, she was voted third in the BBC Sports Personality of the Year award.

She was appointed Officer of the Order of the British Empire (OBE) in the 2009 New Year Honours list, followed in December 2009 by an honorary degree as Master of Arts from the University of Nottingham in recognition of her outstanding contribution to British sport.

One of the Southeastern Class 395 high-speed trains, which are used domestically to provide a 140-mph London-to-Kent link and provided the Javelin shuttle service for visitors to the 2012 London Olympic Games, was named after Adlington. Several other British Olympians also received this honor.

She was one of the contestants in Series 3 of The Jump but withdrew on 7 February 2016 having dislocated her shoulder during training.

At the 2016 Summer Olympics in Rio, Adlington formed part of the BBC presenting team for the swimming events, along with Helen Skelton and Mark Foster. She repeated this role at the 2017 World Aquatics Championships and at the 2018 European Championships, among others.

Main article: I’m a Celebrity…Get Me Out of Here!

Adlington participated in the thirteenth series of I’m a Celebrity…Get Me Out of Here!, which began airing on 17 November 2013 and was held in Australia. She finished in 6th place, being voted out by the public on 6 December 2013.